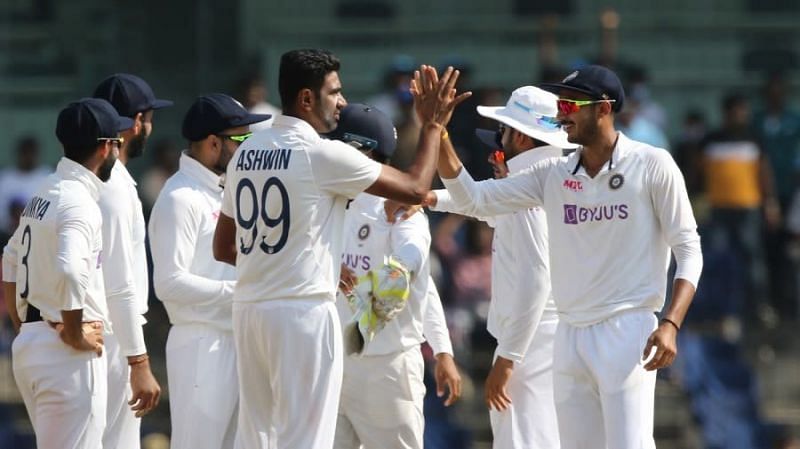 India inched closer to a series-levelling win at Chepauk by picking up 4 wickets in the first session of Day 4 of the 2nd Test against England.Dan Lawrence and Joe Root walked out to bat with England needing over 400 runs to win the Test match. The former didn’t last long, as a brilliant piece of work from Rishabh Pant off the bowling of Ravichandran Ashwin caught him short of his ground.Root then had Ben Stokes for company. The England all-rounder was beaten on numerous occasions, and his only scoring shot – the sweep – didn’t fetch him a single boundary in the 51 balls he faced. Eventually, he was dismissed by Ashwin for just 8 runs, leaving the visitors staring down the barrel.Axar Patel joined in on the fun by dismissing Ollie Pope, before Kuldeep Yadav was denied his first wicket in over two years by Mohammed Siraj, who shelled a straightforward chance at backward point. Kuldeep found a breakthrough in his next over, however.The left-arm wrist-spinner had Ben Foakes caught on the leg-side on the stroke of lunch, and was visibly relieved after the scalp. England are placed at 116/7 at Lunch on Day 4, with Root waging a lone battle on 33 off 90 balls.India should be able to wrap things up in the second session Ashwin will be eyeing a 10-wicket haulGiven the amount of turn the pitch is producing and the unerring accuracy of the Indian bowlers, this Test is unlikely to be dragged into the final session on Day 4. Moeen Ali, Olly Stone and Stuart Broad are the only three English batsmen left.Ashwin, who has taken 3 wickets so far this innings, will look to scalp two more and record his 8th 10-wicket match haul in Test cricket. If he does so, he will become the first Indian cricketer and 5th overall (after Shakib Al Hasan, Imran Khan, Ian Botham and Alan Davidson) to have accomplished this feat.
Published 16 Feb 2021, 11:43 IST