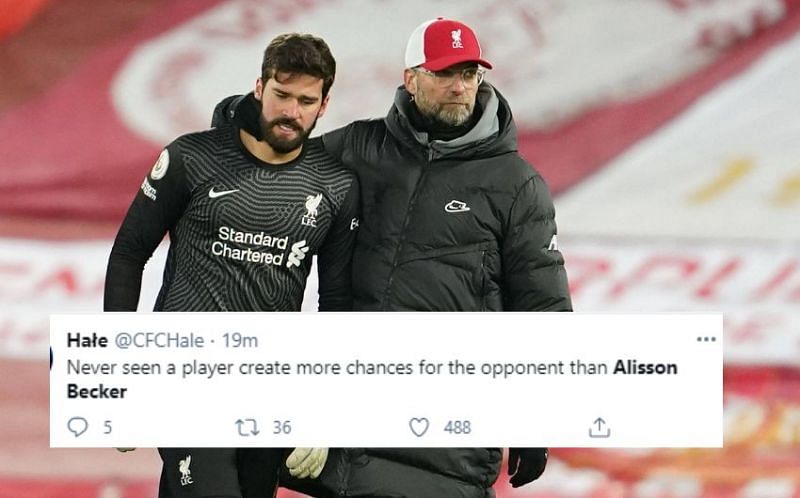 Three minutes of nightmarish goalkeeping from Alisson Becker cost Liverpool all three points as Manchester City continue their dominance.Ilkay Gundogan had one too many chances to claim all three points and he took two of those to help Manchester City to a crucial win. Raheem Sterling nodded home to add cushion to their lead before Phil Foden belted home their fourth goal of the night.Both teams remained organized for the greater part of the game and it was Alisson’s consecutive errors that ultimately gifted City the advantage that they kept till the last.A set of awfully misplaced passes from Alisson Becker around the 75th minute gave Manchester City two chances and they took them both with open arms.10 minutes prior to that, Mohamed Salah had converted from the spot in the 63rd minute after Ilkay Gundogan had given Manchester City the lead.Gundogan made up for a first half penalty miss by poking home a parried shot early in the second to give open the scoring for the Cityzrns.Both teams looked well matched in the first half though Manchester City did look more threatening at times. The game ebbed and flowed but Pep Guardiola’s side should have scored first after Fabinho bundled Sterling inside the area and they were awarded a penalty.The Brazilian’s trailing leg caught Raheem Sterling and Michael Oliver pointed to the spot. However, the usually composed Gundogan took after Kevin De Bruyne and Riyadh Mahrez and sent the ball into the stands.Sadio Mane had missed a great chance earlier for Liverpool after running onto a cross from the right wing. Liverpool tried to claw their way back into the game and Curtis Jones came close with a low shot 10 minutes into the second half but Cancelo had it covered and deflected the ball away.

But Ruben Dias uncharacteristically misread a ball into the box and resorted to tugging Salah from behind and the Egyptian went down and won a penalty. He slotted it home without any hassle.At the end of the night, it was Alisson’s grave errors that cost Liverpool the game and the Brazilian is sure to come under severe criticism. After going 68 home games undefeated, Liverpool have now lost three games on the trot at Anfield.Twitter slams Liverpool’s Alisson and celebrates Manchester CityNever seen a player create more chances for the opponent than Alisson Becker— Hałe (@CFCHale) February 7, 2021Ouch, Liverpool!

5 teams are yet to win a Premier League home game in 2021:🔘 Liverpool 🔘 Fulham🔘 Leeds🔘 WBA🔘 EvertonWay off title-challenger pace. 🏠 pic.twitter.com/cxNu9x47OL— Statman Dave (@StatmanDave) February 7, 2021Bad day for the cut.27 – After 23 games this season, Liverpool (40) now have 27 fewer points than they did at the same stage last season (67), the biggest drop by any reigning champion at this stage of a campaign in English top-flight history. Molehill. #LIVMCI pic.twitter.com/lrwiL8Ndko— OptaJoe (@OptaJoe) February 7, 2021
Published 08 Feb 2021, 00:03 IST