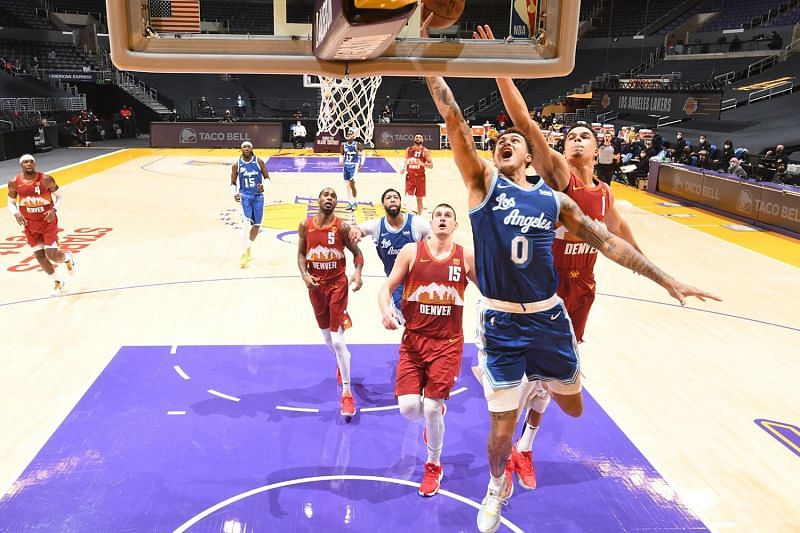 The LA Lakers pulled off a 33-point turnaround in the second half to beat the Denver Nuggets 114-93. Frank Vogel’s men recorded their third consecutive win and started their homestand on a positive note. The Nuggets were reduced to just 35 points in the last 24 minutes and shot the ball below 40% throughout the game.Both teams started off the game well with buckets falling on both ends. The Denver Nuggets continued their groove in the second quarter while the LA Lakers struggled to score consistently. Mike Malone’s side led by 12 at the break.The Purple and Gold clamped up their defense in the second half and used their hustle while protecting the basket to generate offense. Several key contributions helped the cause of the LA Lakers while some of the Denver Nuggets players simply flattered to deceive.On that note, let us look at the five hits and flops from today’s game.#1 Hit: LeBron James (LA Lakers) LeBron James attacks the rimLeBron James dominated Paul Millsap all game long as he recorded just his second triple-double of the season with 27 points, 10 assists, and 10 rebounds. Six of LeBron James’ assists came in the fourth quarter as he dished several full-court dimes to a runner as the Denver Nuggets capitulated.In the process of leading the LA Lakers to a well-fought win, King James recorded his 800th game with 25 or more points. He also overtook the legendary Wilt Chamberlain to go third on the list of career field goals made.

#2 Flop: Nikola Jokic (Denver Nuggets) Nikola Jokic struggled all gameNikola Jokic failed to stamp his authority inside the paint as he finished with a paltry 13 points on 6-of-16 shooting from the field. He also had 10 rebounds and six assists but couldn’t get his teammates involved down the stretch.Jokic has been playing at an MVP level for the Denver Nuggets this season and his shortcomings in the second half allowed the LA Lakers to claw back. He couldn’t force the issue for his side after the Purple and Gold took the lead.#3 Hit: Dennis Schroder (LA Lakers) Dennis Schroder is picked up by his teammates

Dennis Schroder played terrific two-way basketball on the night and even fueled the LA Lakers’ 15-0 run in the third quarter that gave them the control of the game. Schroder scored 21 points of 7-of-9 shooting from the field and also had four assists.Schroder gave both Jamal Murray and Monte Morris a hard time with his dogged defense. He chased down every loose ball and his energy was unmatched on the night. Even when the LA Lakers were struggling early in the game, Schroder held his own against the Denver Nuggets defensively.#4 Flop: Jamal Murray (Denver Nuggets) Jamal Murray is hounded by Lakers players

Jamal Murray had a brilliant start to the game as he scored eight points in the first quarter for the Denver Nuggets. However, he fizzled out after that. He finished with 20 points but only three of those came in the fourth quarter. He also shot just 41.2% from the field.Murray committed several costly turnovers in the third quarter which allowed the LA Lakers to force their comeback. He finished with a team-worst -17 plus-minus rating.#5 Hit: Anthony Davis (LA Lakers) Anthony Davis walks off with SchroderAnthony Davis did not score a ton of points on the night but his defense came through for the LA Lakers. AD had three steals and two blocks as he defended the rim with aplomb and forced multiple Denver Nuggets turnovers. He scored 13 points on 5-of-8 shooting as well. Most importantly, Davis kept Nikola Jokic quiet for extended stretches in the game and that helped his side eke out the win.Also read: Denver Nuggets 93-114 LA Lakers: Twitter explodes as LeBron James cruises past Nikola Jokic and crew with a dominant triple-double performance
Published 05 Feb 2021, 12:05 IST